Has the political situation in Syria influenced your artwork?

Usually I am trying to express the influence of the Syrian war on me, indirectly, as the war is a humanitarian problem and a moral catastrophe. The war has affected the Syrian artists exactly as the WWI and WWII affected the German Expressionism artists, knowing that me and the others Syrian artist were always having the sense in how the Syrian scene would end. The suppression is most likely similar to an uncontrollable exploded volcano.

What inspired Face-Off? (The above painting was the first to be sold on the launch night)

Face – Off, is a painting, which reflects my new concept that I am working on! By using damaged money papers as a background of a certain subject or a cover for an entire painting, indicating symbolically to the power of money in everything, even in art. This money is damaged but it has taken the positive impact in covering the artwork and put an obstacle between the artwork and the receiver. Referring to the unbelievable prices of someart works, which is usually monopolised by a class of people and nobody, can see such art works but them.

What money was used in making the painting Face-Off? 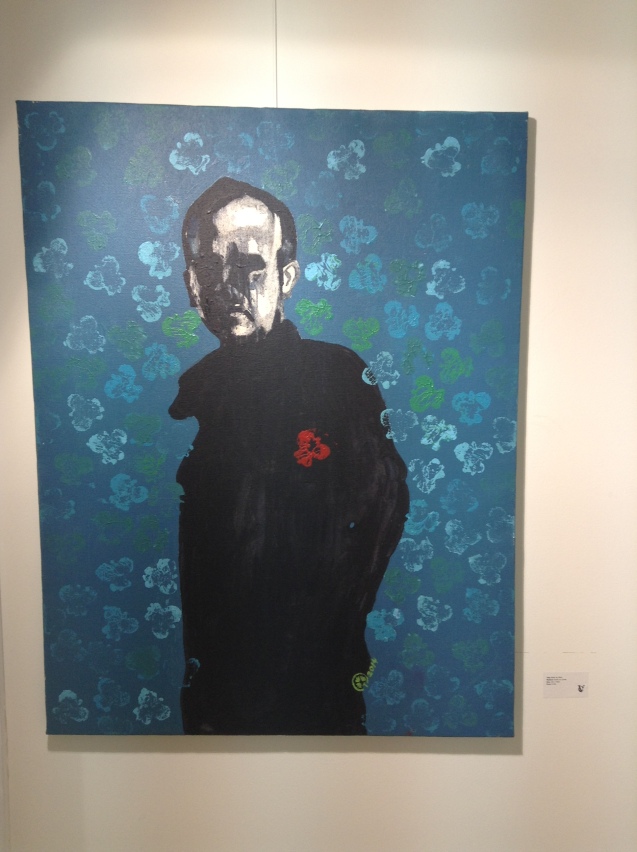 This is a self portray reflecting the conflict between the butterfly smoothness and the ugliness of war, as I put the butterfly exactly in the heart’s position indicating the bad news we’re hearing every moment of murdering and displacement.

What is the main idea of your artwork?

My artwork is almost conceptual, as I’m always tumultuous looking for making fun of war and the ‘’civilization of consumption.’’ As well as from the human brain when leads him to the war for silly interests, which eliminates his humanity when it’s about money, power and control.

What kind of art is coming out of Syria and the Middle East and what can the artwork teach people in London?

No doubt that Syria is an ancient civilised country, where many civilizations were there, and as its very well known that the Middle East was the source of all the monotheistic religions and the first written language. Unfortunately its a permanent place of conflict and one of the most unstable places on earth, that’s why the middle east artists had fallen in the trap of the reporting art work, or tried to reflect his intentions far from reality. But still there’s a solo trails which were capable to override the war concept and come out with a humanitarian concept because of the nature of art as a universal language, which doesn’t only express a stage ends when the event itself ends! In general I can say the middles east art is most likely affected with expressionism.

Why were you interested in having your art shown in London?

There’s nothing new under the sun, the art now goes on in a vicious circle, but the sincere painting or artwork, can approach the human whoever he is. Simply no matter how extreme the artist is in using various techniques, eventually the artwork, which expresses directly the thoughts and feelings of the artist, is the one that can be received faster.

A website dedicated to the Syrian community in London